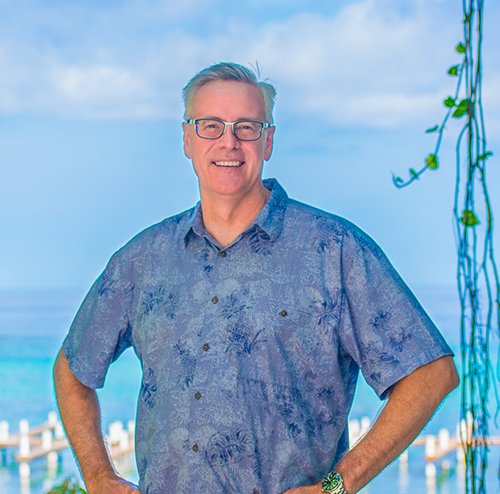 He spent his youth growing up in a small Colorado town, eventually graduating from the University of Arizona in Tucson. Wanderlust sent him to Mexico where he studied Spanish in an intensive immersion program ... Honduras where he was a groundwater consultant for the Standard Fruit Company in Aguan Valley ... El Salvador where he helped drill 50 wells for small villages scattered throughout the country ... and, for a lark, Tegucigalpa (capital of Honduras) where he worked on restoring an old abandoned airplane making it air worthy for its return to the US.

But after falling in love with Roatan, Steve knew no other place would do. He immediately set out to make a total commitment to the island’s future by establishing Roatan’s first major web service and portal company, www.roatanet.com, which today receives more than 1,000,000 visits per year. In the process, he gained first hand knowledge of the business people (both local and ex-pat), residents, retirees, and her many visitors.

Armed with his invaluable experience in handling marketing and technical issues, along with his awareness of local business practices and island mores, Steve’s transition to Roatan Life Real Estate was a natural. His long established reputation for honesty and delivering positive results means that, not suprisingly, his many clients also call him “friend.”

Steve looks forward to being of service for all your real estate needs, island questions and ... if you have a moment ... he’s also a bit of an expert on old movies, snorkeling, and Spanish slang.

Find out more about Steve by watching the below video: